Shai Secunda is the Jacob Neusner Professor in the History and Theology of Judaism at Bard College – a recent move from the Hebrew University in Jerusalem, where he flew in from for his Mellon Sawyer lecture in September. Secunda’s lecture, “‘You May Not Communicate Oral Matters in Writing’: Writing and its Absence in the Transmission of Rabbinic and Zoroastrian Texts,” addressed questions concerning the move from an oral tradition of textual transmission to a written one in eastern late antiquity [watch the lecture here].

How, when and why did oral texts get written down? One may think that an oral tradition of preserving scriptural knowledge would be less precise than a written textual one. Writing, in the western Christian tradition, has long been held up as the best way to preserve [and control] sacred texts. It fixed them and allowed them to be controlled by Roman Christian imperial and early Church authorities. Beyond manuscript writing even, the printing press was hailed as a tool that could further standardize Christian texts like the Bible in the late 15th and early 16th centuries. Committing the text to print, instead of manuscript writing, could more firmly fix it in place so that it could not be altered by the unauthorized user. But how were texts best preserved and maintained in the ancient near east?

The ancient Iranian prophet Mani [c. 216-274 CE] and his followers, the Manichaeans, insisted that writing legitimized and authenticated their religious texts. Mani wrote out his own religious texts – the only religious leader to do so in the premodern era – and advocated for the scribal authority of sacred texts [on the Manichaean predilection for writing and the codex, see Paul Dilley’s lecture here]. However, Jewish rabbis and the Zoroastrian priests of ancient Iran maintained the primacy of the oral transmission of their sacred texts – long after their cultures had adopted technologies of writing. Orality, not writing, preserved the most authoritative versions of religious texts. Only a Jewish rabbi could safeguard the accuracy and proper interpretation of sacred texts. Authoritative rulings on texts were oral. It was even said that rabbinic texts resided in the belly, bones or rooms of the heart, suggesting the deep personal significance of memorization. The living body was the repository of texts, not the parchment scroll or codex.

Religious texts such as the Talmud [including the Mishnah] and ethical tracts [such as the Tractate Avot] were transmitted orally and not written out until well into the first millennium CE. Testimonials by Maimonides and others mention the writing out of early sacred Jewish texts during the late Geonic period [8-11th c.], but the earliest dated manuscripts date to the 11th century. Secunda discussed a Mishnah fragment, dating to 1066 CE and the earliest datable Talmud fragment, dating to 1085 [Egypt]. The Cairo Geniza, a storeroom holding 300,000 fragments of worn or fragmentary Jewish texts in the Ben Ezra Synagogue in Old Cairo, has been important in dating some of these earliest examples of written rabbinic texts. Many of the Cairo Geniza fragments have been digitized as part of the Friedberg Genizah Project and Princeton Geniza Project [be sure to catch Marina Rustow’s April 28 lecture on the Cairo Geniza].

In contrast to the Torah, most surviving early rabbinic texts [Talmud and Avot] are from codices, very few [4-5] survive from scrolls. Those that do are on parchment or leather. This apparent preference for the codex over the scroll for these particular texts happens because, by the 8th c. CE, when these texts are committed to writing, the codex was the dominant carrier of writing. The Torah, still today associated with the scroll, was committed to writing in a much earlier period [pre-codex, before 3rd c. CE], when the scroll was the dominant manuscript format. As Secunda states, rabbinic Jews continued to use the scroll for certain sacred texts [like the Torah] because the codex didn’t have the ‘gravitas’ that the scroll did. The birth of the Torah as a written text was inexorably tied to the scroll form, an association that remained because the rabbis invested it with sacrality. How texts are written down, and what they are written down on, is tied to the dominant book culture of the period in which they move from oral to written form.

When does this move from oral to written occur? Secunda noted that, for rabbinic texts, the late Geonic period – especially c. 750 CE – appears to be an important date, with many texts committed to writing in this period. At this time, ‘Babylonia’ [so-called by medieval Talmudic scholars] – modern day Iraq – was the center of the Jewish diaspora. The Talmudic Academies there were the centers for Jewish scholarship and rabbinic law, and their leaders – the Geonim – were important compilers of rabbinic texts. As early as c. 550 CE, the Geonim had completed the compilation of the Babylonian Talmud. It was in this place of learning and Jewish scholarship that a number of texts, previously only transmitted orally, were written down. The mid 8th century may have been a critical period for Jewish communities in this region, perhaps because of the instability caused by a shift in power from the Ummayad to the Abbasid Caliphate, making it necessary to commit previously oral texts to writing to ensure their survival within a new diaspora.

The Zoroastrians had a similar tradition of orally transmitting texts. Zoroastrianism was the dominant religion of ancient Persia [modern Iran] from the 6th c. BCE to the 7th c. CE. In the case of the Zoroastrians, the shift from orality to writing appears to have taken place within the context of the imperial promulgation of texts during the early Sasanian Empire [225-651 CE]. In the 3rd century, a high priest and imperial advisor named Kerdir boasted about the production of written texts in the imperial bureaucracy and the organization of the Avesta, the sacred Zoroastrian scriptures [in an epigraphic record at Naqsh-I Rajab, known as Kerdir’s inscription]. Here the writing down of sacred texts appears to have occurred under the sponsorship of the early Sasanian emperors, who may have had a stake in solidifying their position at the head of the Zoroastrian church state.

Trying to pinpoint when, where and why these shifts from orality to writing occur is one of the central questions of the Mellon Sawyer Seminar. It will be interesting to see how these dates, places and motives intersect with the introduction and spread of manuscript technologies [sheet materials, writing/ scripts, book forms], religions, political upheaval, movement of people, and the establishments of imperial bureaucracies. Based on discussions with other Mellon Sawyer visitors lecturing on eastern manuscript traditions, the establishment of imperial bureaucracies and the spread of religion appear to have been the primary forces behind the invention and spread of paper, the promulgation of scribal bureaucracies and the establishment of manuscript culture in medieval China [see lectures by Michael Friedrich, Susan Whitfield, TH Barrett and Abdurishid Yakup]. We hope the Mellon Sawyer mapping project [forthcoming, late 2017] will graphically illustrate how such factors overlap and intersect. 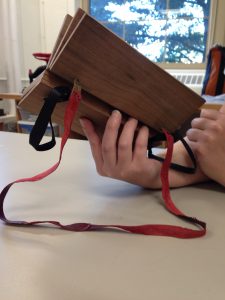