The final Mellon Sawyer Workshop focused on the craft of north African bookbinding in the early Christian era. Book conservator Julia Miller began the workshop day with a presentation on the Coptic codices of Nag Hammadi, Egypt – followed by a workshop on Ethiopic madhar binding with Gary Frost.

The Nag Hammadi codices are extremely important in the history of the book, since they are the oldest surviving complete codices in the Christian tradition. Mostly single-quire codices [consisting of one gathering of papyrus sheets], they were produced in Egypt in the 4th century and contain gnostic Christian texts written in Sahidic Coptic, including gospels [the only complete copy of the Gospel of Thomas], prayers, and apocrypha.  We have fragmentary evidence of earlier codices, for example – evidence of multi-quire codices dating to the 2nd century, but these are the earliest examples of the codex that exist in the western tradition. Ten of the surviving eleven Nag Hammadi codices are housed at the Coptic Museum in Cairo [originally discovered at near Nag Hammadi, Egypt].

Julia Miller, Conservator Emerita at the University of Michigan Libraries, brought her models of the Nag Hammadi and other early Coptic codices and gave a presentation on these books, available here [slides with text, no audio].

Miller notes in an essay co-authored by Spitzmueller, “Cairo in August: Researching the Nag Hammadi Codices,” that the leather on the covers is in excellent condition [considering their age], largely because of the dry Egyptian desert climate which has prevented the dry rot that so often damages leather books in more humid climates [Bonefolder, Volume 4, Number 2, Spring 2008]. 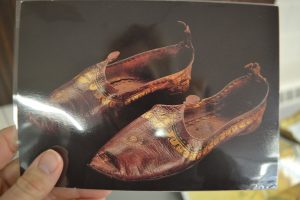 Miller noted that the skills involved in constructing and decorating the leather covers on early Coptic codices were skills already established in other craft traditions, such as shoe-making and trades that involved lacing, painting, tooling leather. She has mentioned seeing beautifully crafted leather work at the Coptic Museum, including a funerary shroud from Fayum, painted with parchment lacing and decorative cut outs resembling the tooling on early Coptic codex covers from Hamuli and Edfu. This discussion of the early craft antecedents of the codex is something that UI Conservator Emeritus Gary Frost has been discussing for years, and has recently been articulated by Georgios Boudalis, in his 2015 lecture ‘The Making of the Early Codex and the Crafts of Late Antiquity’ [see lecture video below]. This idea will be explored more in the symposium ‘Early Codices: Production, Destruction, and Modern Conservation’ at the Bard Graduate Center in NYC [Feb. 2018]. 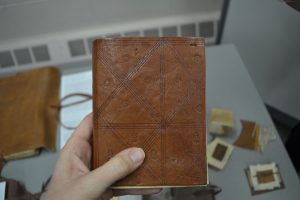 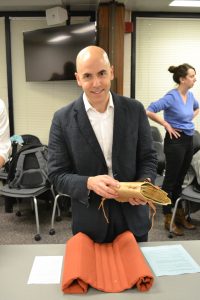 Miller’s Nag Hammadi models arrived in Iowa in advance of her visit, for the earlier Mellon Sawyer Workshop on April 1 [see Asian Palm Leaf Workshop post]. We were lucky to get her models a couple of weeks early to coincide with the lectures by AnneMarie Luijendijk and Brent Nongbri. Brent used Julia’s models to give a short presentation on early Coptic manuscript production. Brent is a scholar of early Christian texts, and discussed the production of these manuscripts, their discovery at Nag Hammadi, Egypt, and some of the variations between the surviving bindings. We were very lucky to have these books here at Iowa in April and learned a lot about early Christian book production!

Brent Nongbri and Miller’s model of a Nag Hammadi codex.

Miller’s presentation was followed by a workshop by Gary Frost on Ethiopic madhar bindings. Mellon Sawyer participants each made a small model of an Ethopic book and madhar carrying case, from previously assembled book kits. Elise Hochhalter, UI graduate student [Book Arts MFA / Library Science MA] and book conservation assistant, started the workshop out with a presentation on Ethiopic books, demonstrating examples from the model collection and the UI Special Collections, which housed four Ethiopic manuscripts in their original bindings.

Participants sewed their books, using a link stitch sewing in paired stations. The link stitch has a long and fascinating history, and is believed to have first been used by Coptic Christians in Egypt, before it was brought to Ethiopia in the 4th century with the spread of Christian texts in north Africa. The Ethiopic board attachment [method of attaching the boards/covers to the textblock] uses channels drilled into the wooden covers, which the sewing thread passes through while sewing the first and last gatherings of the book. It is a sophisticated technical improvement over the Coptic bindings of the period, and protects the thread from wear and damage at the cover.

After the link stitch was sewn through the book’s wooden covers, end sheets were attached and the madhar case constructed. These protective carrying cases [above] are commonly associated with Ethiopic book production and allowed the manuscripts to be easily transported. The leather madhar cases are blind-tooled to match the covers of the books. Encasing texts in leather cases is not reserved for large manuscripts. This technique is also seen with small talismanic Ethiopic scrolls, which can be sewn closed into full leather cases which are ritually sealed and offer healing and spiritual protection to the wearer.

Mellon Sawyer participants had a chance to examine the Ethiopic manuscripts from UI Special Collections during the workshop. The collection includes at least 4 bindings generously donated by Fritz James, dating from the 19th to the 20th centuries. Though these are not early Ethiopic books, they are created in exactly the same way they were 600 years ago, scribed in black and red in Ge’ez, on parchment, with wooden covers [sometimes covered in tooled leather] and leather carrying cases. This continuation of early book production technologies is the most durable of all traditions in the western tradition. One outlier in the collection is an Ethiopic book bound not in leather, but in cloth, over wood and corrugated cardboard covers! One of the wood covers likely fell off and was replaced by more readily available cardboard. Folk repairs abound in the Ethiopic and Coptic binding traditions and one often sees that the books’ wooden covers have broken in half and are sewn together with thread to prevent them from detaching. 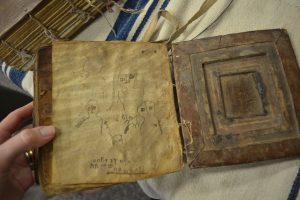 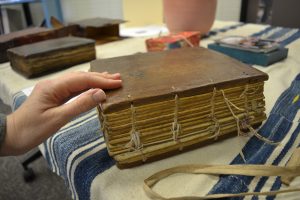