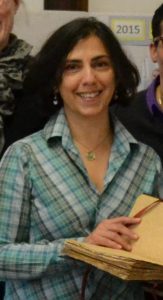 On the first day of April, Yasmeen Khan, Head Conservator at the Library of Congress, led an Islamic bookbinding workshop for Mellon Sawyer participants at the University of Iowa. Khan was visiting Iowa City as a Mellon Sawyer Seminar scholar, and presented a lecture the previous day on ‘Bindings Informed by the Arab Manuscript Tradition: A Conservator’s Perspective.’ Other lectures included Francois Deroche on Arabic and Islamic manuscripts, Sabine Schmidtke on the Zaydi manuscript tradition of Yemen [13th-20th c.] and AnneMarie Luijendijk and Brent Nongbri who discussed early christian papyri from late antique Oxyrhynchus, Egypt. Full Mellon Sawyer lectures are available on the Seminar website.

The workshop was packed, with 30 participants attempting to make an Islamic book in an 8-hour work day. Because of the complexity of the book-to-be-made and the short duration allotted in which to complete it, I divided the group into working pairs, each consisting of a bookbinder and a non-binder. It was not difficult to find willing bookbinders at the UI Center for the Book to fill out the ranks!

The book was a model of a 15th-century Turkish binding, with some nods to Persian decoration. It was made with a two-part cover – upper and lower cover made of book board, which is attached to a cloth spine liner, then covered in leather and tooled [instead of using one large piece of leather to cover the entire book]. The lower cover had an envelope flap which sat under the upper cover when closed. At the spine edge of the upper and lower cover, the leather was pared thin and adhered to the spine, one piece overlapped the other. The two-part covering style is found on many Turkish bindings [among others], though it is often not detected because the overlapping leather often looks seamless on the spine. 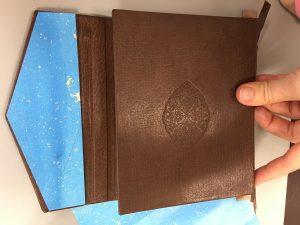 The workshop began with a viewing of an Islamic Papermaking video made by the filmmaker father of Mellon Sawyer participant and papermaker Radha Pandey, who herself teaches Islamic papermaking throughout the US and abroad [check out her tour schedule and work at: www.radhapandey.com]. The video, in Urdu, discusses the steps involved in making paper with Islamic techniques and discusses the lineage of a papermaking family within the town of Sanganer, Rajasthan – a place known for paper and textile production. Fiber is prepared from a mix of raw hemp and torn strips of recycled manuscript which are beaten and stamped in water to form a pulp.

Indo-Islamic papermaking uses a mould with detachable screen and deckle sticks. Sheets are pulled, transferred to a stack or post and pressed slowly using weights [also seen in Japanese papermaking]. Sheets are then brushed onto plastered walls outside to dry [this is seasonal production therefore, not possible during the monsoons]. As noted, many of these processes are similar to techniques and tools used in Nepalese and east Asian papermaking. Dry sheets are then coated with a light coating of wheat starch, dried and burnished to give them a crisp sheen and make them suitable to take ink without bleeding. European papers were burnished, but not to the extent of Islamic papers, which were traditionally burnished to a lustrous sheen.

In the Middle Ages, papermaking moved from China to Europe through Islamic craftspeople and trade routes, so to study Islamic paper is to study this critical cultural link connecting eastern and western traditions. Paper transformed every culture that it was introduced to, so the role of Islamic paper on European culture should not be underestimated. Jonathan Bloom explores this history in his Paper Before Print: The History and Impact of Paper in the Islamic World.

We began by sewing the sections of the book together, a task helped along with some pre-prep [sections pre-punched, sewing begun]. The book block contained 18 sections, sewn in a single paired station using a simple and fast link stitch. The link stitch has a fascinating and complex history! It appears on the earliest codices from Coptic Egypt, and is a technology that was shared across early Christian cultures from north Africa [Egypt and Ethiopia], throughout the Near and Middle East [Byzantium, Armenia, Georgia, Syria] to northern Europe [8th-c. St. Cuthbert Gospel of John]. Each culture adapted the link stitch to their own needs and textual traditions. With the 7th-century rise of Islam, Muslims adopted this link stitch sewing for production of the Koran and Koranic commentaries. The adaptation of the link by Muslim binders is light [few stations/holes, light thread], as compared to the heavier application seen in Byzantine bindings [more stations/holes, heavier sewing thread often formed in an extended/reinforced link]. This is due to the early adoption of paper by Muslim scribes and bookmakers, which creates a book block that exerts less stress on the binding than a parchment book block. Many texts were also meant to be read supported in a book cradle, which reduced stress on the binding. In any case, we sewed our books and started in on the next step. 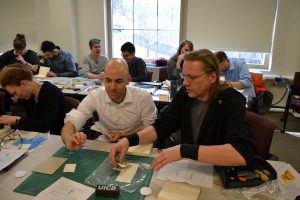 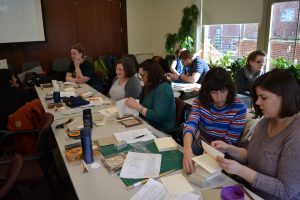 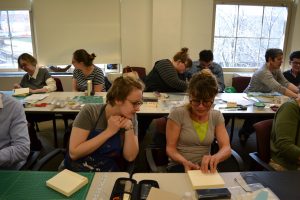 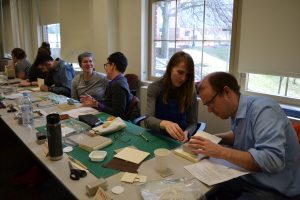 We gave our book spines a slight round and added a cotton cloth spine liner, before jumping into the final task for the morning, sewing Islamic headbands. 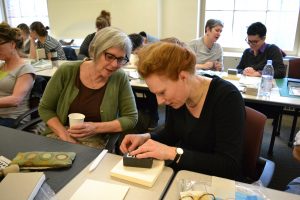 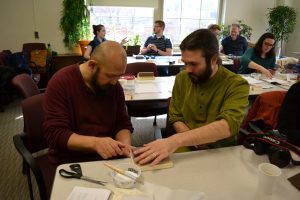 The Islamic chevron headband has an intimidating reputation, but, like all headbands it just requires some practice to understand the logic of the sewing pattern and a little time to get into the groove. Even experienced binders need a formal introduction, so we set up an Islamic chevron headband tutorial the day before the workshop, so the binders could get a couple under their belts before assisting their non-binder partners during the workshop day. We met in the UI Book Conservation Lab and Khan walked binders through the steps of sewing the chevron headbands. It is basically a two-part headband consisting of a primary support of leather and thread fastened to the head and tail of the book, and a secondary sewing of two colors of silk thread sewn in like a weaving across the primary support. The trick with the chevron headband is to keep the tension light on the ends [left and right] so you end up with an even pattern that sits proudly the full width of the spine, and doesn’t end up shrunken up and deformed at the ends. I forgot to take a detail of this in action, but this site outlines the steps. The Mellon Sawyer seminar often visited the topic of the craft origins of early book technologies. The woven nature of the Islamic headband sewing connects this bookbinding technologies to ancient craft production in the Near and Middle East, as it replicates established patterns and systems used in weaving tapestries, rugs, and cloth. This is true not only of headbands, but leather work, binding structures and closures. 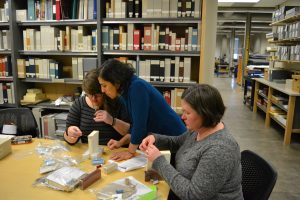 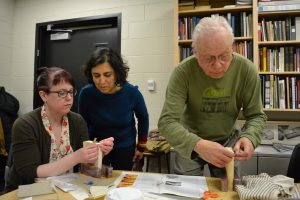 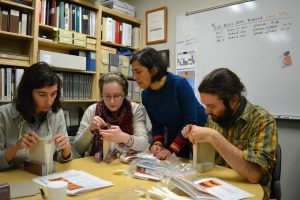 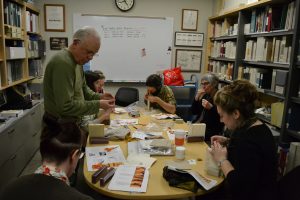 On the day of the workshop, the headband sewing went remarkably well! Khan provided a walk-through on the overhead projector –  a brilliant way to provide detailed step-by-step instructions for participants. Headbands anchor the book at the head and tail [top and bottom] and provide stability and support to the book. They also cover and protect the folds of the book at the head and tail and are beautiful! To lay the foundation for the chevron sewing, the primary headband is anchored down to the book through the center of each section or gathering, using the pre-punched holes [we pre-punched, but generally headband tie-downs are all over the place, and it is often much easier to just ‘sew as you go’ than to find pre-punched holes]. Francois Deroche, the father of Islamic codicology, had a eureka experience at this step, discovering that the quire marks made at the outside corners of the sections are marks used by the binders to find the center of gatherings when sewing the headbands. That was pretty cool and lends credence to what we already know at the Center for the Book, making informs knowing in ways that are sometimes surprising. 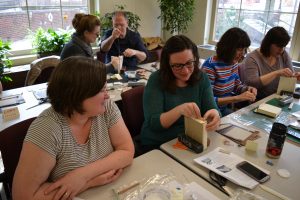 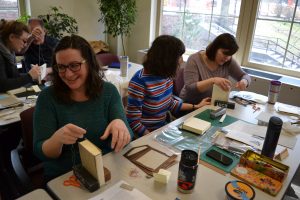 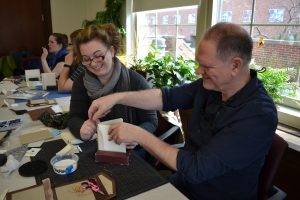 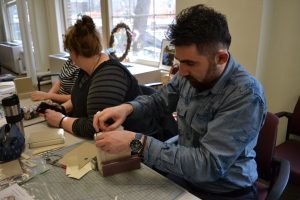 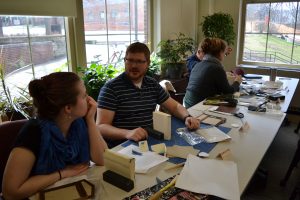 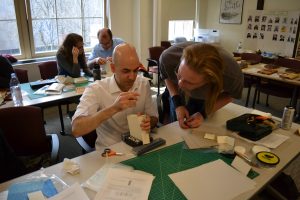 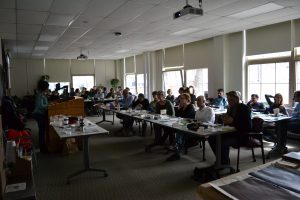 After a much-needed midday lunch break [delicious Mediterranean fare], participants continued work on their headbands. By mid-afternoon we had completed our book blocks, headbands and all, are were ready to turn to the covers, cover decoration and attachment.

The book, in a style not uncommon to Turkish and other Islamic binding traditions, is constructed with a two-part cover – the upper [front] cover, and lower [back] cover with an envelope flap that sits under the upper cover when the book is closed. This two-part cover allows the leather to be tooled off the book, then attached [with overlapping pared leather at the spine], and also allows the binder to make use of smaller sections of leather [instead of needing a large piece of leather to cover the entire book]. It is often a difficult technique to detect, since the overlapped leather on the spine can appear as one piece.

Because we had so much to accomplish, the bookboard covers were cut and covered with leather in advance of the workshop, by a dedicated team of binders who cut, pared, trimmed and pasted the leather to the covers [thanks Bill Voss, Giselle Simon, Sarah Luko, Johan Solberg, Julie Leoard, Suzanne Glemot, Candida Pagan!] 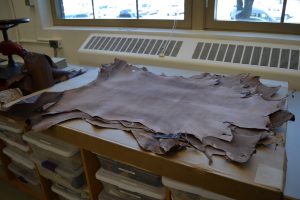 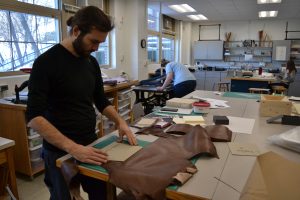 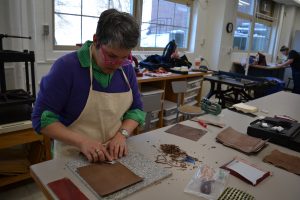 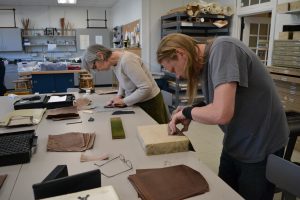 On the day of the workshop, participants blind-tooled their leather covers before attaching them to the book. Blind tooling  involves creating impressions into dampened leather using metal [or other] tools. It is referred to as ‘blind’ since it is plain, without gold or colored pigments.

We first framed our covers with double-lined marks, impressed into the dampened leather with a bone folder [low tech way to go if you don’t have metal tools]. Khan brought a die stamp, cut to the shape of a mandorla for the center of the covers, and a smaller stamp for the envelope flap. Leather was dampened and nipped under pressure, the metal tool creating impressions in the leather. The placement was determined by scoring a single vertical and horizontal lines across the center of the upper and lower covers. These cross-hair lines have long been used by Islamic binders to center decorative tools in the middle of the covers. The vertical score marks even became integrated into the decorative motifs on covers, in the Persian, Turkish, Ottoman and other Islamic traditions – with vertical lines extending from the central mandorla becoming tooled in gold. This is a great example of how process can influence decorative techniques. 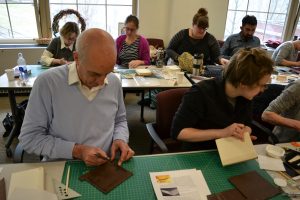 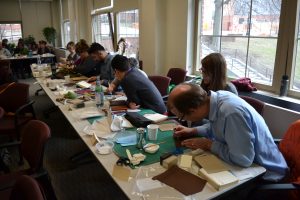 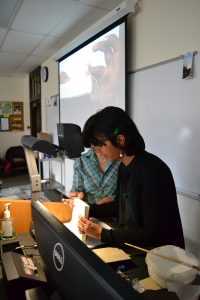 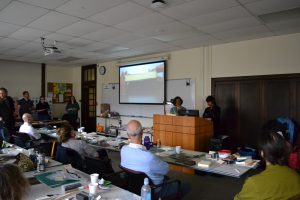 After tooling was complete, Khan gave a quick demo on leather paring [thinning the edge of leather] and handed the covering demo over to Radha Pandey who demonstrated how to attach the covers to the book. The overhead projector came in handy again! The covers were attached to the spine, the cotton spine liner glued to the boards. 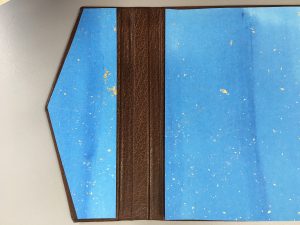 The final step was to glue up the paste downs, the papers attached to the inside of the covers and the envelope flap. Giselle Simon and I made the gold-flecked endsheet papers ahead of time. I painted a light weight [Mohawk] paper blue, allowing it to dry, then pasted it out with a water solution containing 2% methyl cellulose, and sprinkle-brushed gold leaf through a rigid screen so it fell in uneven bits onto the tacky paper. I then pressed each sheet between newsprint and tyvek [so the leaf would stick to the paper, not the tyvek]. Sheets were then allowed to dry overnight under weight [and wax paper to prevent gold from sticking to anything], and cut down to size for the workshop. 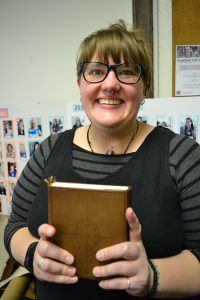 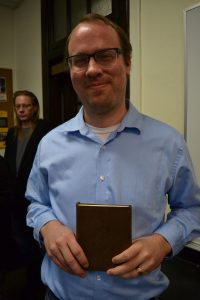 With end sheets pasted down – the books were done and proudly displayed!